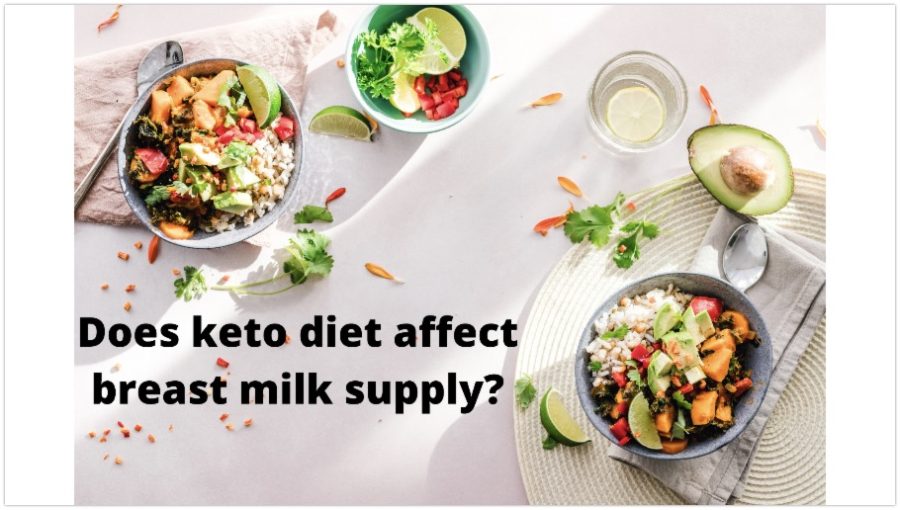 The keto diet is a low-carb, high-fat eating plan that has many benefits for those who are seeking weight loss or other health benefits. It is not uncommon to hear people say that it can affect your milk supply, but does the keto diet hamper breast milk supply? There are studies on both sides of the spectrum, so let’s explore what science says about this topic.

What is the Keto diet?

The keto diet is a low-carb, high-fat diet  that has many benefits for those who are seeking weight loss or other health-related goals.

The keto diet is not a new phenomenon, but it’s popularity in recent years may be due to the increased awareness of its potential effects on various aspects related with overall well being and disease prevention (elevated levels). The idea behind this eating plan is to get the body into a state of ketosis, which means that it’s using fat as its primary source for energy instead.

The idea behind why people see these benefits from following such an eating plan is because a Ketogenic Diet (Keto)forces your body’s metabolism into using fats as its primary source of fuel rather than carbs and sugars which are typically used by our bodies first when it comes time t replenish their stores with glucose or glycogen after we’ve depleted them through exercise..

The goal isn’t only weight loss but also improve mental clarity & better physical performance… It’s not just about losing pounds; there may be other health-related goals in mind too!

However, there is a case report published in 2019 talks of the effect on someone that had given birth and followed a high-fat and low-carb ketogenic diet.

The woman came to the hospital with severe nausea, vomiting, and several episodes of diarrhea lasting 9 hours. She also reported abdominal pain in addition to low back cramps which are malaise-like symptoms she developed after giving birth 18 weeks ago when her son was exclusively breastfed. The patient had continued following a strict ketogenic diet since then because it’s something they do for their health-conscious lifestyle. However she also hadn’t eaten for days due to experiencing abdominal pains. There are also risks to fasting for breast feeding women, including starvation ketoacidosis and fasting should be avoided while breast feeding.

This resulted in lactation ketoacidosis. Lactation ketoacidosis is a well known condition in cows which occurs in early lactation when high demand of glucose creates negative energy balance that leads to fat mobilisation, ketosis and ketoacidosis. It’s important to note that, although there isn’t a lot of reasearch done on the effects on humans, this appears to be a fairly uncommon occurrence in women that are breast feeding.

Women who have just given birth and want to lose weight quickly might be tempted by the idea of a ketogenic diet. This is because they experience an increased energy demand from lactation, which means their bodies use more glucose than usual for fuel- producing higher levels in blood sugar (ketoacidosis). A woman could develop this condition if she adheres strictly onto low carbohydrate food plans that lead up depleting your body’s glycogen stores – forcing you into using gluconeogenesis as an alternative energy source for production of breast milk!

This case also shows that the symptoms and ketoacidosis resolved themselves with rehydration and after restarting a normal diet while breast-feeding.

Although ketogenic diet is being considered a safe nutritional intervention for weight loss and has grown to be a popular implementation for successful weight loss in the medical literature, social media, and fitness blogs, the index case may provide caution in lactating mothers on/or considering a ketogenic diet. It is important for clinicians to educate lactating mothers interested in weight.

Breastfeeding and the keto diet can be done together if you are careful about your intake of carbs and calories.

It is important to be careful about how many carbs are consumed when following a Keto Diet while pregnant as well since this will have an effect of breast milk supply too!

A low carb intake may also cause constipation which could lead mothers not wanting their babies near them due discomfort from gas pains. It might even make moms feel like they need more sleep than usual so that way mommy has enough energy for her day-to­day tasks with little ones at home. If these symptoms persist then consult medical advice immediately.

A spike in insulin levels has been known to decrease lactation. A low carb intake may also cause constipation which could lead mothers not wanting their babies near them due discomfort from gas pains. It might even make moms feel like they need more sleep than usual so that way mommy has enough energy for her day-to­day tasks with little ones at home  If these symptoms persist then consult medical advice immediately

The effect on protein from Keto diet

The Keto Diet May Not Be The Best Choice For Breastfeeding Mothers: Protein Is Important, But A Ketogenic Lifestyle Limits The Amount Of Protein You Can Consume

The keto diet may not be a good choice because there’s an increased risk that you’ll have too much or little in your system, both being bad choices when pregnant with breastmilk.

The high-protein content also means more calories than usual so this could lead to mommy feeling tired all day long.

Foods like avocado, meat, nuts, seeds, eggs and vegetables are all great options for breastfeeding moms on the keto diet

The keto diet is a great way to lose weight but it’s not the best for breastfeeding mothers. The high-protein content also means more calories than usual so this could lead you feeling tired all day long and protein intake limits your ability consume enough of other important nutrients like calcium, iron or vitamin D which are essential during pregnancy with breastmilk production as well!

A decrease in estrogen levels due to weight loss, which can affect lactation hormones such as prolactin

The Keto Diet also has an effect in decreasing estrogen levels while pregnant women have higher needs than usual due their bodies producing more milk so this could affect hormone balance leading up until birth when there should be no restrictions at least one month after delivery before starting any new diets if possible.   If someone wants to start eating healthy again they need time to adjust back to old habits

The Keto Diet is a serious lifestyle change that means consuming only one diet, sticking to it closely and making small but successful changes along the way. Many people don’t know how long this journey can be or how they might feel about it in the future.

It’s not just about the food, but also following an unfamiliar eating plan or lifestyle change which could lead up increased stress levels in some women.  This may affect their milk supply as well because it takes time for your body to adjust back into old habits after you’ve been on this diet long enough so if someone wants to start healthy again they need to have more patience with themselves when starting out fresh!

For these reasons we don’t suggest starting the Keto Diet while you’re breastfeeding.  It’s best to wait until you’ve weaned your child and then try the diet.

If someone is already on this eating plan, it may be worth talking with a doctor about how they can maintain their milk supply while following keto guidelines.

Is there a way to counteract this effect of the Keto diet?

It might also help if she were able to eat more carbs during her pregnancy or lactation period! This will give them some extra energy which could make up for what was lost when going Keto in order to keep breastfeeding without any problems!

If not possible though there are other ways of getting calories like adding coconut oil into food as well so that should work too but again talk things over first before making changes because everyone has different needs depending on where at currently health-wise nowadays especially pregnant women!

Ways to increase your milk supply while breastfeeding

The best way to increase milk supply is by pumping more often.  This will help stimulate the production of breastmilk and can also relieve any pain that a mother may be experiencing from engorgement or blocked ducts .   It’s important for mothers who are breastfeeding on keto diet not only drink enough water but eat plenty too! This includes foods such as avocados, eggs with omega-three fatty acids in them like salmon , nuts which all have healthy fats ! There should always talk things over first before making changes because everyone has different needs depending where at currently health wise now days especially pregnant women so it would depend what they’re comfortable doing while still being able time feed their baby without feeling guilty about anything else going wrong.

So, what’s the verdict? Is the keto diet bad for breastfeeding moms and their babies? The answer is a little complicated. On one hand, there are some potential dangers to following the keto diet while breastfeeding that can have a negative effect on breast milk supply, due to the decrease in estrogen levels caused by the diet. This can be countered by eating more carbs during pregnancy or lactation, and pumping more often.

If you are breastfeeding while following the keto diet, it is important to drink plenty of water and eat healthy fats.But on the other hand, if done correctly, the keto diet can actually be beneficial for nursing mothers and their infants. It all comes down to how well you stick to the guidelines and how closely you monitor your own health and that of your baby.

At the end of the day, it’s up to each mom to decide what’s best for her and her child. If you’re breastfeeding and decide to try the keto diet, it’s important to track your own personal symptoms and experiment with different levels of carbohydrate intake to find what works best for you.